Lawrence Hamilton was a Broadway star who appeared in such shows as Porgy and Bess, The Wiz, and Jelly’s Last Jam. He was inducted into the Arkansas Entertainers Hall of Fame in 2005.
Lawrence Oliver Hamilton was born on September 14, 1954, in Ashdown, Arkansas, one of six children of Oscar Hamilton and Mae Dell Neal-Hamilton. He later lived in Foreman, where he attended Foreman Public Schools and took piano lessons from a woman who had been a friend of ragtime composer Scott Joplin.
He studied music education, as well as piano and voice, at Henderson State University in Arkadelphia, receiving a Bachelor of Arts degree. In a 2002 interview, he said that he used to spend his high school summers working at a southwest Arkansas poultry plant while he dreamed of making it on Broadway. After college, Hamilton moved to Florida to perform at Disney World. There, he met talent manager Tommy Molinaro, who invited Hamilton to come to New York to audition for the actor/director Geoffrey Holder.
Starting out on Broadway, Hamilton played parts in many of the significant African-American-oriented musicals of the late twentieth century. After debuting in 1979 in Timbuktu, he appeared in the 1983 revival of Porgy and Bess. He joined the cast of a 1984 revival of The Wiz, first playing a Munchkin, then a Kalidah, then a field mouse, then an Emerald City citizen, then Lord High Underling, and finally the Tinman. He performed in the 1986 revue Uptown…It’s Hot!, and was dance captain of Truly Blessed, a 1990 musical tribute to Mahalia Jackson. He was a standby for Jelly’s Last Jam, the 1992 musical based on the life of jazz musician Jelly Roll Morton. He also played the Rev in Play On!, a 1997 musical modernization of Shakespeare’s Twelfth Night. In Ragtime, a musical based on E. L. Doctorow’s novel, Hamilton played the lead role of Coalhouse Walker, a black man who suffers racist attacks.
In addition to performing on Broadway, he also served as a musical director for opera star Jessye Norman; was a vocal coach for pop-music group New Kids on the Block; and was a member of the Southern Ballet Theater, Brooklyn Dance Theater, Ballet Tap USA, and the Arkansas Opera Theater. He performed at the White House for Ronald Reagan and at the Vatican for Pope John Paul II.
At the Arkansas Repertory Theatre, he appeared as Whining Boy in The Piano Lesson, created Souvenir (featuring the works of Randy Goodrum), and directed the 2006 production of Crowns.
Hamilton died at Lenox Hill Hospital in New York City on April 3, 2014, due to complications from surgery. At the time of his death, he was on the faculty of Philander Smith College in Little Rock, Arkansas, where he had served as the cultural affairs director and as an associate professor of the humanities and director of choral activities. 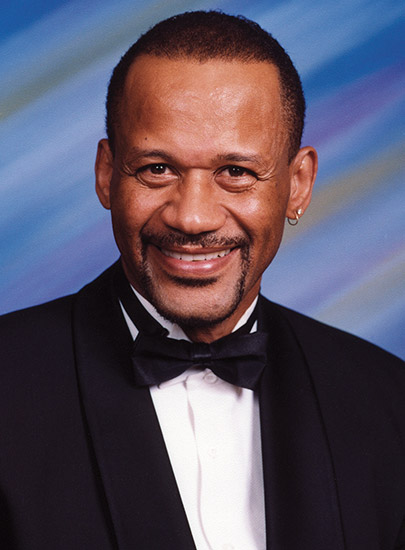