Maya Angelou was an internationally renowned bestselling author, poet, actor, and performer, as well as a pioneering activist for the rights of African Americans and women. Her first published book, I Know Why the Caged Bird Sings (1970), was an autobiographical account of her childhood, including the ten years she lived in Arkansas. The popular and critical success of the book was the foundation of her career as an author and public figure, as well as the basis of her identification as an Arkansas author. She held over fifty honorary university degrees, along with many other awards recognizing her accomplishments in the arts and her service to human rights.

Angelou was born Marguerite Annie Johnson on April 4, 1928, in St. Louis, Missouri, to Bailey Johnson, a naval dietitian, and Vivian Baxter Johnson, a nurse. Angelou had one sibling, her older brother Bailey Jr., who started calling her “Maya,” his version of “my sister.” After their parents divorced, the two moved to Stamps in 1931 to live with their paternal grandmother, Annie Henderson, and their uncle, Willie. Henderson owned the only grocery store in the small town and reared the children according to the strict Christian values common in the rural South at that time. The family encountered the racial prejudice of the white customers in the store and the community leaders in general. In her autobiography, Angelou recounted chafing at the attitudes she encountered of people who seemed to condone the limited opportunities available for black high school graduates of the time. Later, Angelou suggested that her faith and Christian beliefs—as well as her strong sense of fair play and realization of her own and others’ inner beauty—stemmed from these early experiences.

In 1935, the children returned to live with their mother in St. Louis but were sent back to Stamps after it was discovered that Marguerite had been sexually molested by her mother’s boyfriend. The man was tried and convicted but then released; he was found dead soon after. The eight-year-old girl felt guilty and believed that her voice had caused the death of the rapist, so she became mute and remained so for several years.

Later the two children moved again to live with their mother—this time in San Francisco, California. After dropping out of high school, Marguerite was briefly employed as a cable car conductor, the first black person ever to hold that position. She returned to Mission High School and earned a scholarship to study dance, drama, and music at San Francisco’s Labor School, where she also learned about the progressive ideologies that may have served as a foundation for her later social and political activism. In 1944 three weeks after graduation, she gave birth to her son, Guy. She had no further formal education.

At age sixteen to support herself and her son, she worked in many capacities: cocktail waitress, dancer, cook, and sex worker—all before the age of twenty-five. She used these life experiences to serve as themes in her works of prose and poetry.

At age twenty-one, she married a Greek sailor, Tosh Angelos; they divorced in 1952. While singing at a San Francisco nightclub, she created her professional name, Maya Angelou, using a variation of his surname and her brother’s nickname for her. Eventually, she legally changed her name.
In 1954–55, she toured Europe and Africa in a production of Porgy and Bess. In 1955, she and Guy moved to New York City, where she studied modern dance with Martha Graham and Alvin Ailey. She appeared in television shows and released an album called Miss Calypso in 1957, also appearing in the film Calypso Heat Wave that year. From her teen years, she continued to develop her writing skills, including poems and song lyrics.
She met prominent members of the African-American creative community and performed in Jean Genet’s The Blacks. With Godfrey Cambridge, she produced Cabaret for Freedom, a fundraiser for the Southern Christian Leadership Conference (SCLC). Martin Luther King, Jr., a leader in the SCLC, recruited Angelou as its northern coordinator in 1960.

In the early 1960s, she met South African freedom fighter and civil rights advocate Vusumzi Make, a leader of the Pan Africanist Congress who then lived in New York City. They moved to Cairo, Egypt, where she became editor of the weekly newspaper the Arab Observer. In 1963, she and Guy left Egypt for Ghana, where she met Malcolm X. She became an assistant administrator at the University of Ghana’s School of Music and Drama and later a feature editor for the African Review, as well as a feature writer for the Ghanaian Times and the Ghanaian Broadcasting Company, where she also recorded public service announcements.

While residing in Africa, she studied several languages: Fanti (a West African language), French, Italian, Spanish, and Arabic. Her time in Ghana was chronicled in Essence magazine and was published in 1986 as All God’s Children Need Traveling Shoes. When she returned to the States, she resumed her civil rights activities.

In reaction to these events, Angelou—encouraged by novelist James Baldwin—began writing the first installment of her life story, including an account of her years in Arkansas. I Know Why the Caged Bird Sings was first published in 1970 and has since been translated into more than ten languages. Her experiences in the civil rights movement were a focus of a later autobiography, The Heart of a Woman (1981). Enjoying her burgeoning career as a writer, lecturer, and public personality following the publication of I Know Why the Caged Bird Sings, she wrote the screenplay for Georgia, Georgia, a Swedish-American film; it was the first screenplay by an African American to be filmed. A collection of her poems, Just Give Me a Cool Drink of Water ‘fore I Diiie, was nominated for a Pulitzer Prize in 1972.

Winning much critical acclaim and becoming a much demanded national figure and speaker, she continued to maintain her political activism. The running themes in all of her works dealt with the individual’s wish and right to survive in a non-hostile world.
In 1973, Angelou married Paul du Feu, a Welsh writer and cartoonist, from whom she was divorced in 1980.

In 1975, President Gerald Ford appointed her to the Bicentennial Commission. In 1981, she received a lifetime appointment to the Reynolds Chair of American Studies at Wake Forest University in Winston-Salem, North Carolina. She read her poem “On the Pulse of Morning” at the Inauguration of President Bill Clinton in 1993, her poem “A Brave and Startling Truth” at the fiftieth anniversary of the United Nations, and her poem “From a Black Woman to a Black Man” at the Million Man March in 1995.

Angelou had a distinctive speaking voice, and, at six feet tall, was a powerful physical presence enhanced by her training in dance and stage performance. She was nominated for a 1977 Emmy Award for her compelling performance in Alex Haley’s miniseries Roots. Angelou appeared on many daytime and morning talk shows. She also started a Hallmark greeting card line called, “Life Mosaic.” The movie Poetic Justice (1993) featured Angelou’s poetry. In 1998, she made her film directing debut with Down in the Delta (1998); in 2006 starred in Tyler Perry’s Medea’s Family Reunion; and in 2002 won a Grammy for Best Spoken Word Album for A Song Flung Up to Heaven.

Angelou was awarded the National Medal of Arts in 2000; the Presidential Medal of Freedom by President Barack Obama in 2011; and the Literarian Award from the National Book Foundation and the Mailer Prize for Lifetime Achievement from the Norman Mailer Center in 2013.
Her body of published works includes autobiographies, numerous poetry collections, a book of essays, several plays, a screenplay, and a cookbook. Among her many works are Gather Together in My Name (1974), Singin’ and Swingin’ and Gettin’ Merry Like Christmas (1976), The Heart of a Woman (1981), All God’s Children Need Traveling Shoes (1986), A Song Flung Up to Heaven (2002), Hallelujah! The Welcome Table: A Lifetime of Memories with Recipes (2004), and Mom & Me & Mom (2013).

After being in poor health, Angelou was found dead by her caretaker on May 28, 2014. In June 2014, the town of Stamps renamed its only park in her honor. On April 7, 2015, the United States Postal Service released a first-class stamp in her honor. In March 2016, the U.S. House of Representatives passed a measure to rename a post office in Winston-Salem after Angelou. 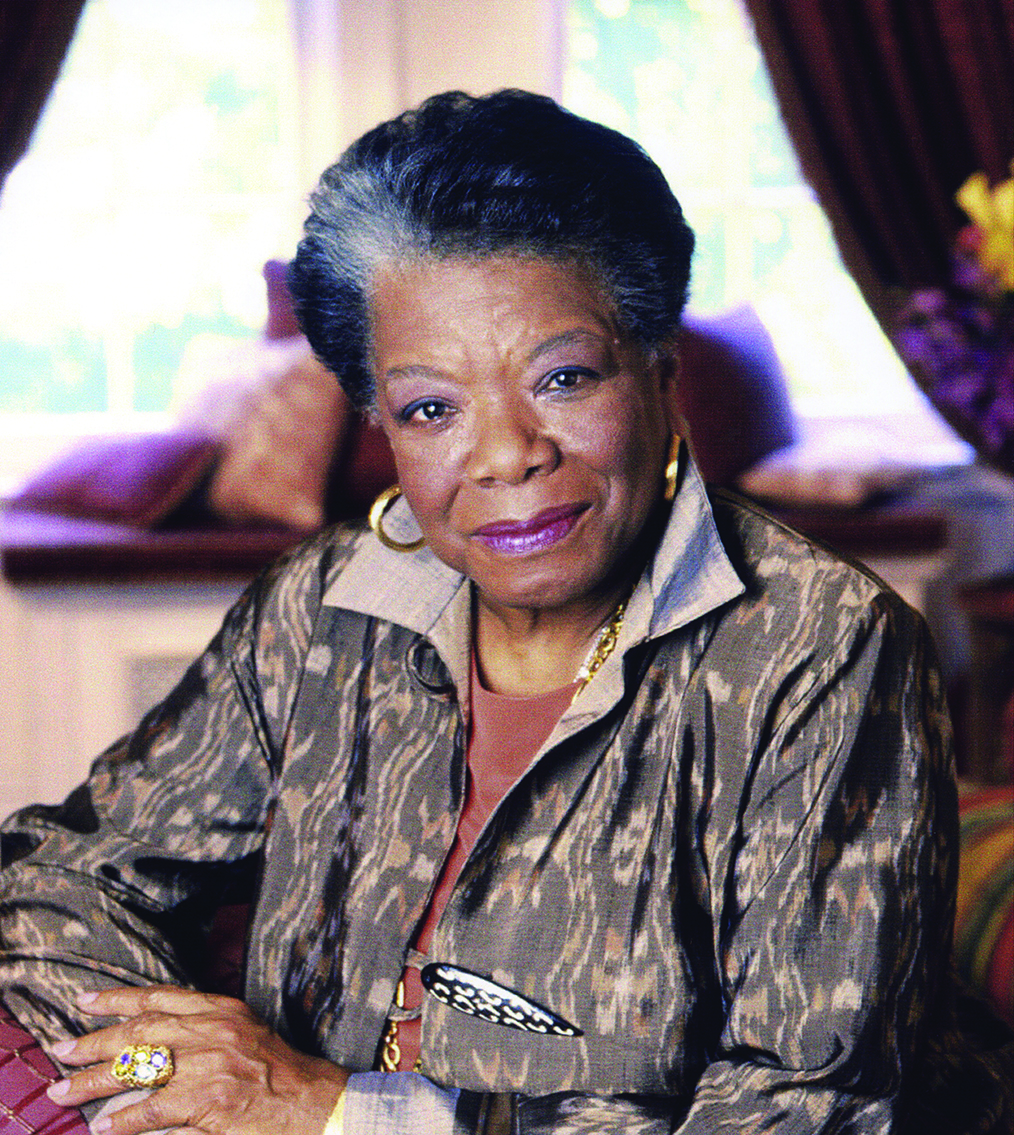